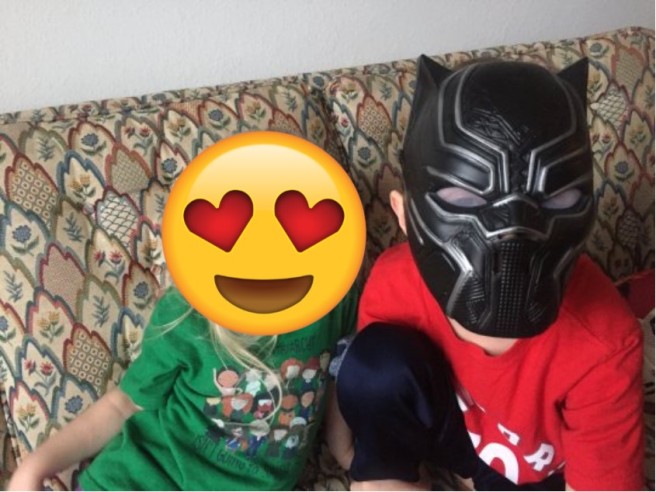 Writing in Rolling Stone this week, Tre Johnson had the following line about Black Panther:

Like anything black in America, Black Panther will be politicized for being black, which is to say for being and for announcing itself as a having a right to be here and to be heard.

Johnson is right, of course. There are dozens of Google search results pointing to troll sites dedicated to ruining something beautiful and non-white, with idiot takes if you’re so inclined to seek them out. But the easiest summation of the irrational fear related to the film is the simple fact that Snopes.com had to publish an article debunking an insane lie that white people were getting attacked at movie theaters for daring to see the movie.

I took my kids to see Black Panther because, first and foremost, I wanted to see it, and they were with me (I’m not a perfect parent … sometimes you have to do what I want to do, babiez). But it wasn’t just a selfish choice – my 7-year-old son was Black Panther for Halloween, even though he was only vaguely familiar with the story through a few comics we read together, so that piqued his interest. And my 4-year-old daughter generally enjoys anything that involves kicking ass, so she was on board as well.

There are an abundance of reasons to see the film – all of the detailed reporting on its beauty, on its relevance, on its power, on its importance … none of those things are undersold. Along with being a fan of the comic book, all of the critical acclaim Black Panther is receiving is well-deserved and can’t be overstated (although I’m positive the internet take economy will inevitably produce some contrarian ‘actually it wasn’t that good’ troll pieces). I caught myself in awe of the story and the amazing performers bringing it to life on multiple occasions.

But as most parents probably understand, I have a hard time watching things through the lens of an adult anymore. I am constantly trying to put myself into the minds of my kids, to understand what they’re thinking or how they’re processing what they’re watching or whether they’re too young for ideas I’m trying to introduce them to. Constant anxiety over whether or not you are screwing up your kids is pretty much neverending.

There are so many elements of the movie that I’m still thinking about and processing, but the relationship I was fixated on throughout was the one between T’Challa and his younger sister Shuri. I saw my son and daughter in them – a stoic, pensive older brother and a brilliant, feisty little sister who are amazing friends, supporters of one another, and reliant on each other. That is exactly the relationship I witness every day between Oliver and Isla.

Beyond that, there was a male hero whose support system and inner circle was comprised almost solely of badass women (and … uh … Tim from the British Office for some reason) who were smart, strong equals who saved him on multiple occasions.

Given the current political climate where there is an administration in power who clearly sees humanity in tiers of worthiness, or where nobody Fox News hosts can show their ass by unsuccessfully trying to chastise one of the biggest celebrities on the planet, Black Panther at the most base level is just a giant middle finger to that worldview.

My son ranked it right behind the Star Wars movies (a minor miracle considering Star Wars has been in a class by itself for him for nearly two years now) and better than any super hero movie he’s watched. My daughter, who spends a good percentage of her free time dressing up as super heroes and performing stealth fighting moves on unsuspecting adults, was in awe of the Black Panther costume.

So obviously, for my kids it wasn’t that deep. They saw it as a great superhero movie with characters they both easily related to without a second thought. And that’s exactly part of its power.